Cabin Weekend Off the Grid

The Marketing and Product Development team here at UCO recently decided to take a weekend to get out of Seattle and test some gear (not just ours) at a coworker’s cabin near Hoodsport, WA. The cabin is entirely powered by solar panels, and is a couple miles away from any paved roads. It’s definitely “off the beaten path”. Needless to say, it was a great weekend with A TON of photos taken by our very talented friend, Colton Jacobs. Here is a selection of some of our favorite shots: 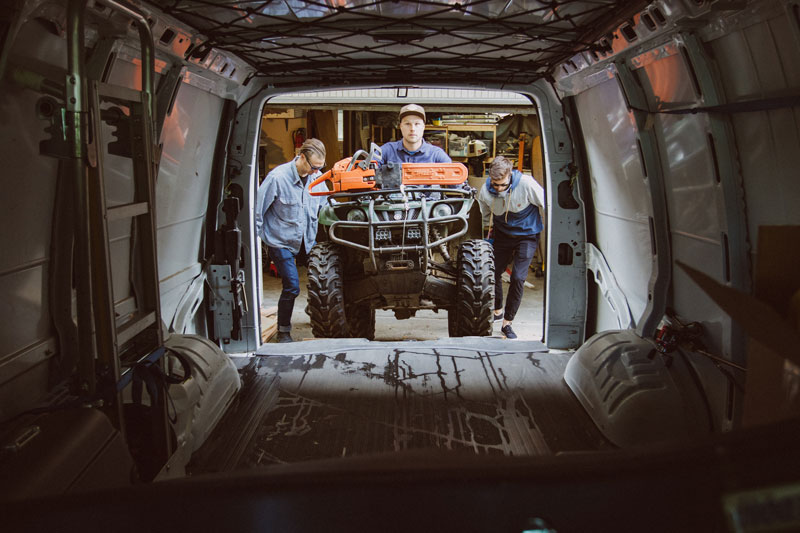 First step was rolling Joe’s ATV into the back of the UCO van. A delicate, yet sophisticated system of wooden boards, elbow grease and lightly squeezing the throttle finally loaded the vehicle into the van. Note the chainsaw: We weren’t just going for fun, we were also going to cut firewood in preparation for a cold winter on the Olympic Peninsula. Here you can see Peter, Joe, and Addison using some teamwork to make the dream work. 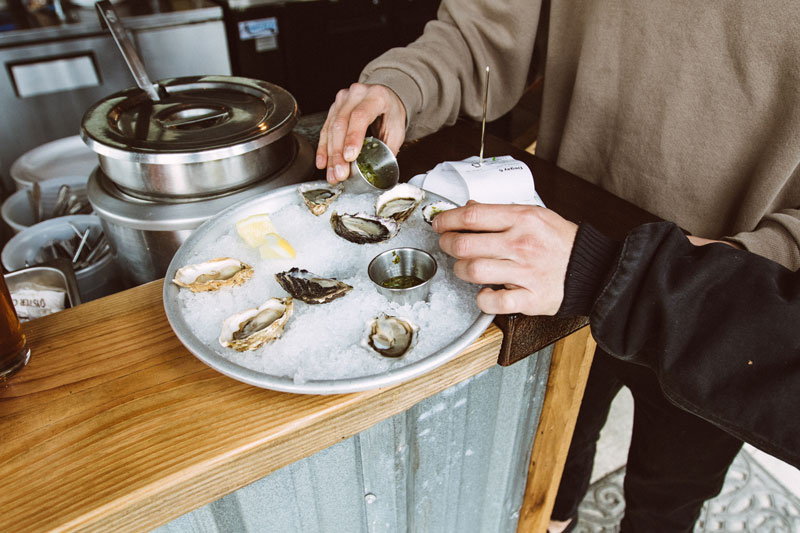 Hoodsport, WA is a tiny town on the east side of the Olympic Peninsula. The town probably has a population of less than 500 people, and that spikes the most during the summer season. Well, we were there in the middle of the fall, so the town was pretty quiet this time of year. We stopped by a local oyster shop called the Hama Hama Oyster Saloon, and were not the least bit disappointed. The oysters were amazing, the saloon was right on the edge of the tideflats and their homemade vinegar sauce was killer. Okay, back to business… 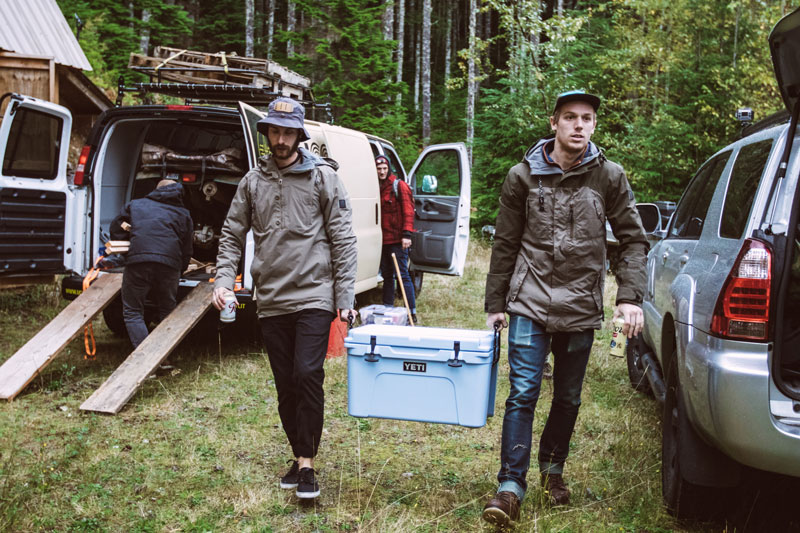 After arriving at the cabin, we began to unpack everything. We brought way too much stuff for just a weekend, but clearly didn’t skimp out on the essentials… The YETI Tundra cooler was packed to the brim! 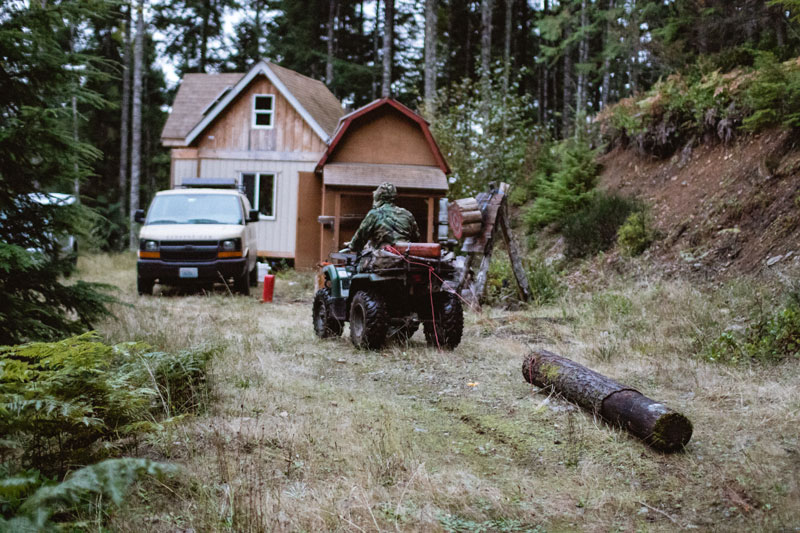 Step one was to grab the low-hanging fruit (the logs that were already on the ground for us). Joe rigged up a questionable haul system, and dragged this log back for us to get started on. In the background is home sweet home for the weekend. It’s a cozy cabin that runs on solar power and is heated with a wood burning stove on the main floor. It was perfectly suited for our needs, and made for a sick home base. 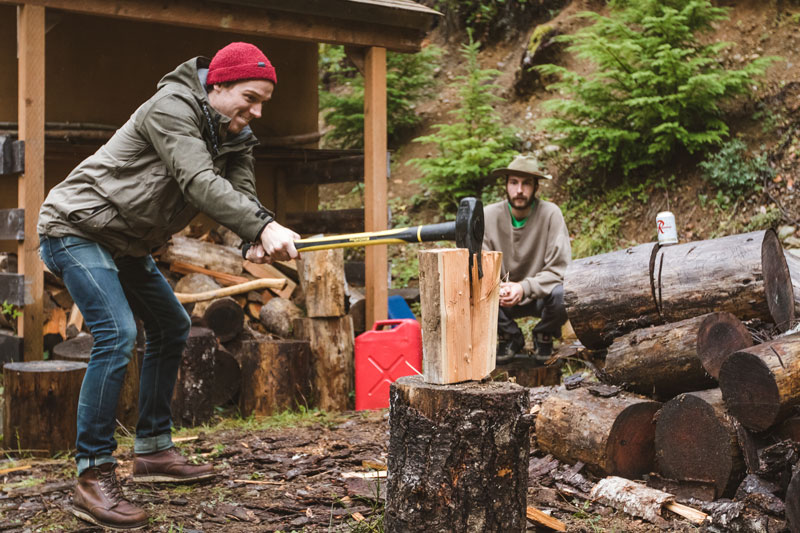 Colin and Addison got to work splitting, chopping and sawing down some of the logs so that we could begin drying them under the cover of the wood shed. Here Colin gets to lay into an amazingly dry section that was already at the cabin when we got there. 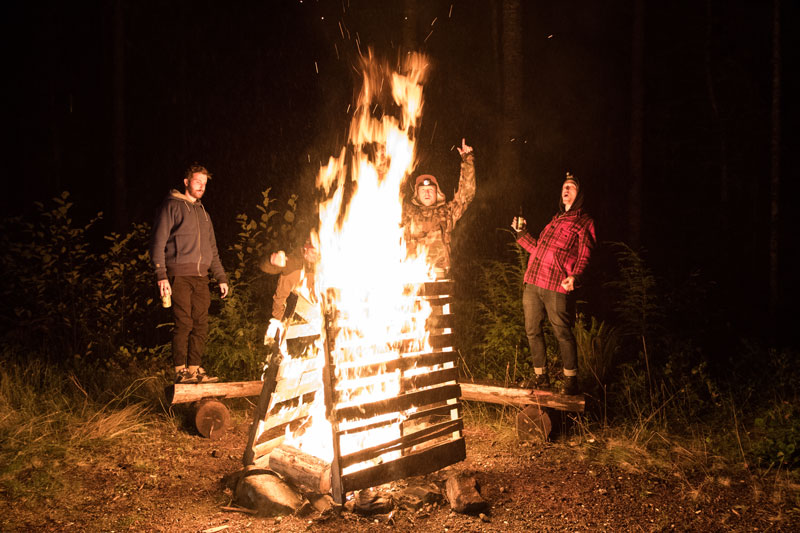 As we knew that pretty much all of the wood that we found and cut at the cabin would be soaked, we came prepared with some old shipping pallets from the office that were well past their prime. The spark caught and the whole pyramid blazed like a great Norse pyre or a beacon in the darkness. The heat coming off of the fire was incredible, and we all had to step away from the fire after just a few minutes. 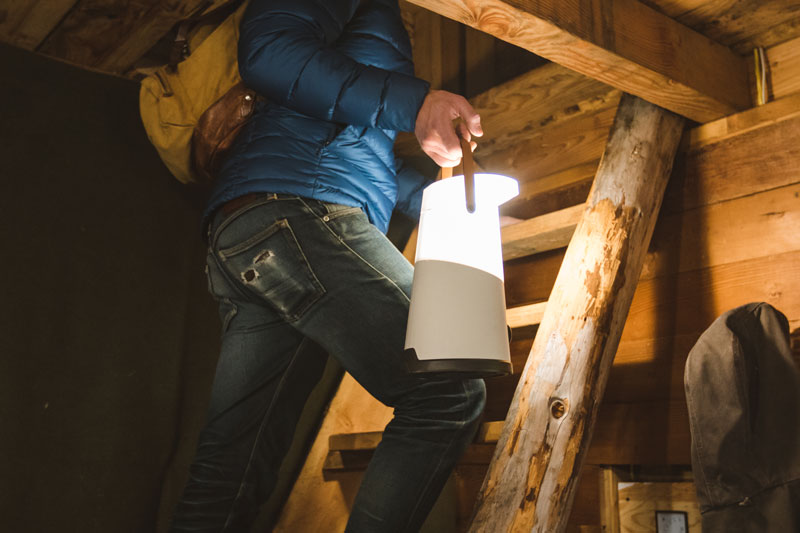 Remember how the cabin is solar powered? Well, seeing as we were completely socked in with clouds, the solar power only lasted so long. Here’s Colin carrying our Sitka Lantern (coming soon!) up to the loft to illuminate our sleeping area. Before the end of the night, the entire cabin was illuminated by the UCO LED line, and our cabin was feeling more cozy by the minute. 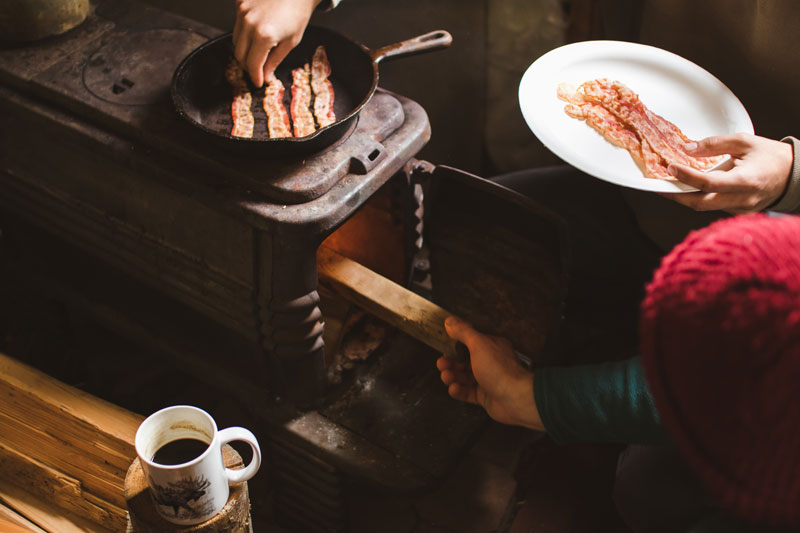 The next morning we decided to put the wood burning stove to use as more than just a heater for the cabin. We heated water for coffee in addition to cooking some bacon with a cast iron skillet. Yeah, the bacon was clearly too flimsy, but everyone stops their complaining as soon as they catch the scent of bacon filling the air. 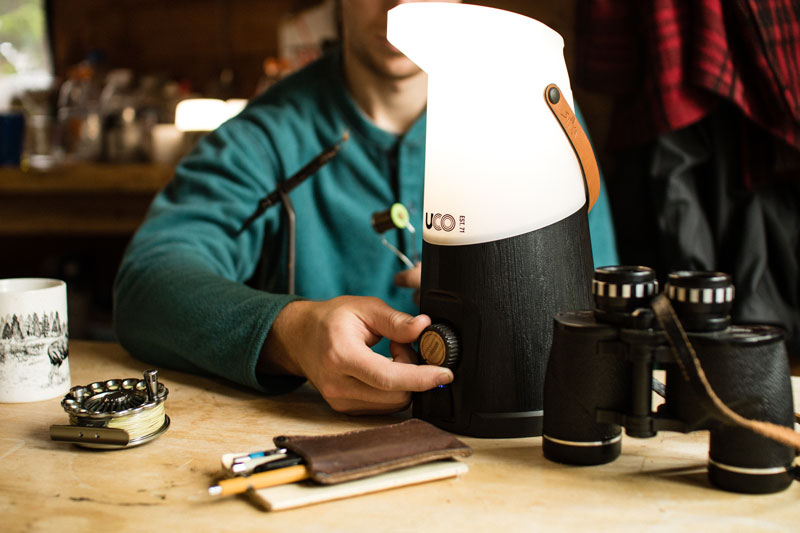 After some breakfast, Colin decided he wanted to try his hand at tying flies. The plan was to go out on Joe’s boat later in the afternoon, and a few of us were going to stay along the edge of the lake and try to see if we could get a hit from some trout. Well, the weather prevented any of us from wanting to try to work on our roll casts once we were actually out there, but Colin did improve at fly tying (marginally). 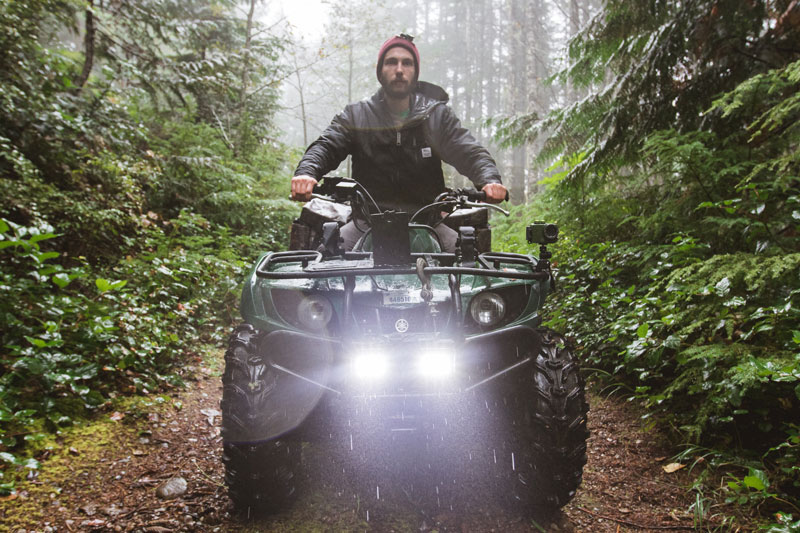 Meanwhile, we decided to test out the warmth and water-resistance of our NightCap Knit Beanie, and Addison was particularly keen on this one. We had him stay out there for a while on Joe’s ATV as a somewhat cruel joke as it was forty-five degrees and raining, but I think the joke was on us. He clearly doesn’t seem to be minding the cold rain that much, and in hindsight he may have had the best assignment of all of us. 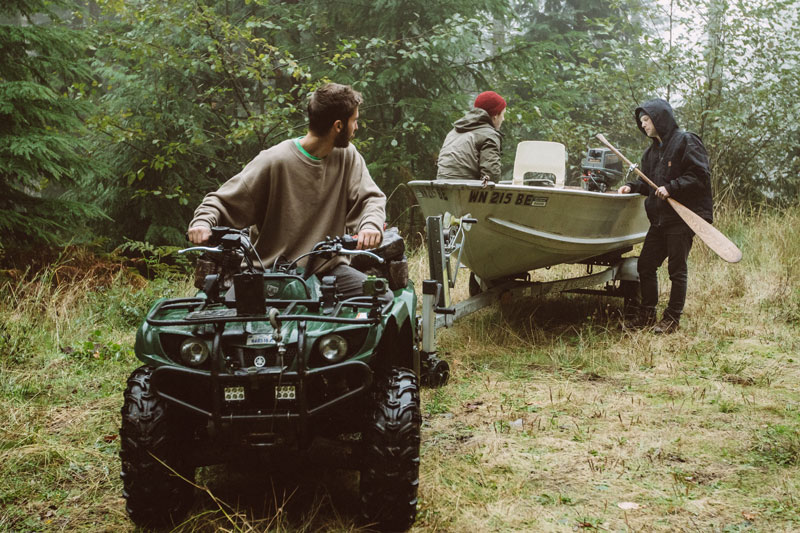 Utilizing a temporary (notice: temporary) break in the weather, we loaded up the boats to head down to Lake Kokanee. Kokanee was going to be a chance for us to try to catch some fish, test some Intova cameras, and have some fun on the water. Well, we definitely had the entire lake to ourselves… 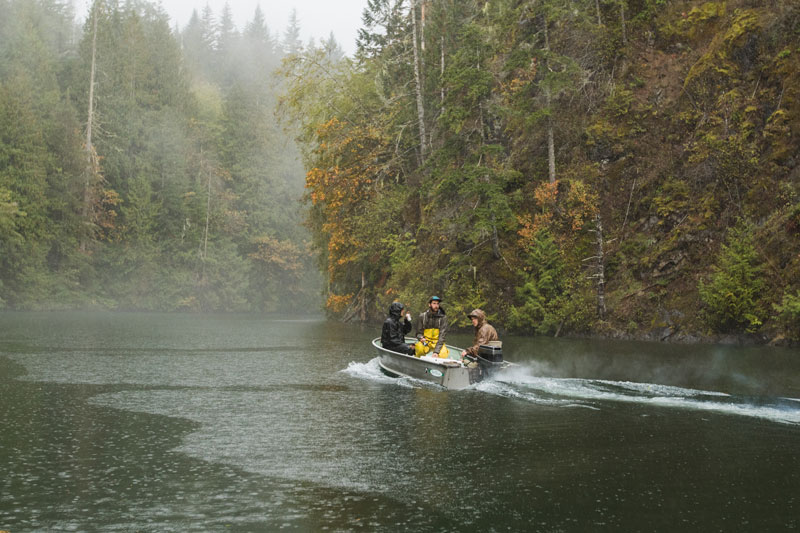 As you can probably see from the picture, this is when the rains REALLY came. That didn’t mean that we couldn’t cruise around the lake looking for fish and testing out the waterproofing of the Intova cameras though! Here we see a very, very wet Peter, Addison and Joe making the most of a damp situation. 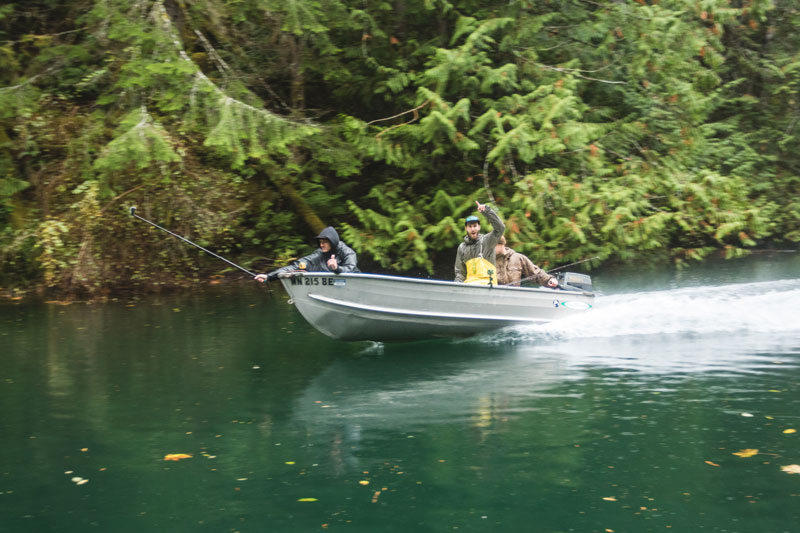 After a very wet, cold end to the trip, we were all ready to head back to Seattle to thaw out. Lake Kokanee proved to be a gorgeous lake, but we were simply there at the wrong time. All in all, it was a great weekend in which we were able to use lots and lots of the products that our parent company, Industrial Revolution, represents while still being able to help set up Joe’s cabin for the winter. We’d do it again in a heartbeat, but perhaps we’ll wait for clearer skies.